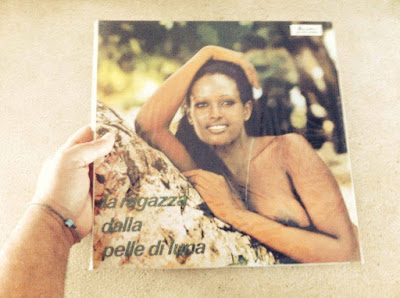 Amazing work from the legendary Piero Umiliani – a perfect soundtrack to show the warmer sound of his talents, which are sometimes eclipsed by his weirder electronic modes! The soundtrack's from an erotic film starring sex-goddess Zeudi Araya, but despite the kinky origins of the material, the music's actually got a lot more sophistication than you'd expect – and the score feels more like a Morricone cerebral one than a cheesy sexy one – with dreamy wordless vocals floating around in the mix, and these sweet-stepping basslines that are especially wonderful – setting a slow funk current at great moments, in that Euro easy way of blending some hip bass with warmer strings and other instrumental touches. There's some haunting piano at points, too – and Umiliani has a great way of making the music sound emotive, but never sappy at all.

Also known as The Sinner on UK VHS, this one could almost be mistaken for a D'Amato Black Emanuelle film (as well as Jess Franco who also had a film with the same video title). The Italian title translates as The Moon-Skinned Girl, a reference to the amazingly attractive Zeudi Araya, who made two other films with the same director. As a film it really typifies the 'eurotika' of the 1970s - the story concerns a couple with marital problems who escape to the Seychelles and the husband meets - and has an affair with - the title character. The wife meanwhile meets an ex-pat living there (Giacomo Rossi-Stuart!) with whom she has a fling. The couple realise their love for each other and return home stronger for it.

Thanks... looking forward to it!