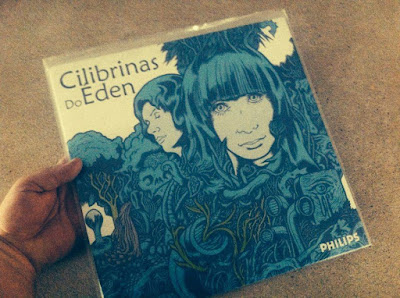 Rita Lee of Os Mutantes and her friend Lúcia Turnbull's first outside project, these recordings were done for Philips in 1973. Cilibrinas Do Éden have played at Os Mutantes show in May 1973, at Palácio de Convenções do Anhembi, in São Paulo. It was Cilibrinas' first gig. At this show, Rita and Lúcia played with all the Os Mutantes backline, the show appeared to be a psychedelic edge with Rita and Lúcia dressed like some outside aliens for that time. They also dressed in colored clothes and feathers like a progressive rock band. Never officially released on vinyl or CD,
Now a group of Brazilian fans with European residence pick the recordings and put them in this deluxe vinyl format, with only 500 numbered copies done.
This release contain also two rare outtakes from Os Mutantes. You will certainly dig this if you like Mutantes: these recordings are a mix of the psychedelic Os Mutantes with some glam-rock freakness. Fantastic, professionally remastered sound, unbelievable material for all the Os Mutantes fans, and one of the best lost albums of Brazilian psychedelia!

P.S The original album was recorded, but never came out in 1973. I didn't want to merge this with the 2008 Brazil unofficial release.

Would love to have that in FLAC, if you have the chance please consider making it available!

it's not the file type that's an issue this is a dope record but it has way too much Noise Reduction ain't nothin' wrong with a little noise - the heavy use of N/R makes this hard to listen to. I've noticed that other rips on other blogs sound the same... Just record that vinyl straight into ya DAW or Sound Forge etc. Render and post the wav file or at least untouched MP3's