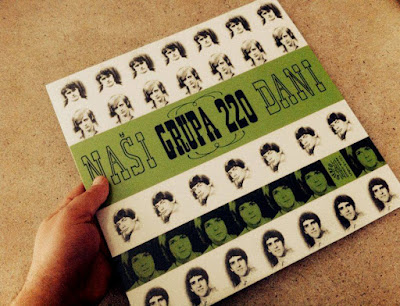 GRUPA 220 was formed in 1966, in Zagreb, Croatia (ex-Yugoslavia) with members of bands "Ehosi" and "Jutarnje zvijezde" . They had their first gig in october the same year. In december they record their first song "Osmijeh" which becomes a big hit right away. Very soon they become one of the most popular bands in former Yugoslavia. Long hairs and "flower power" clothes attracted lot of young people. Flowers were the tickets for their concerts. In 1967 and 1968 Drago Mlinarec (vocal and guitar) composed music for two films "Protest" and "Tri sata ljubavi". They take part in "Zagreb 68" and "Split 68" festivals, and also first "Pop festival" in Zagreb. Grupa 220 released the first rock long play record in ex-Yugoslavia "Naši dani". They played as support band on the concerts of Marmelade, Status Quo and Mungo Jerry when they were touring ex Yugoslavia 1968. 1971 Drago Mlinarec leaves the band and goes solo. Grupa 220 continues to exist and record without him till 1975 when they split up.By Jugo Rock Forever