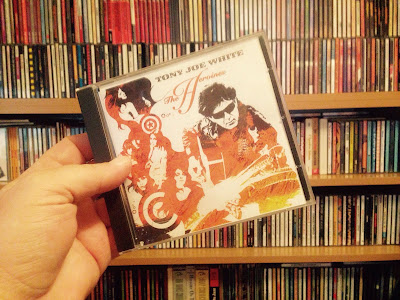 Tony Joe White, aka the Swamp Fox, has been on a roll these past few years, issuing album after self-released album of quality original material full of deep, dark, blues-flavored Florida vintage roots music.Heroines is no exception, but it is a record with a twist. First, it's on the Sanctuary label. Secondly, five of the record's 12 tracks are recorded with female vocalists in duet. They include the great Jessi Colter, Shelby Lynne, Emmylou Harris, Lucinda Williams, and Michelle White. The set opens with "Gabriella," a brief, jazzy flamenco-kissed instrumental, played on a pair of acoustic guitars. "Can't Go Back Home" stars Lynne. A true laid-back Tony Joe nocturnal swamp blues, it nonetheless carries within it that slightly menacing tension. Lynne's voice, which is well known for its power, showcases its other side here, one that is expressive, soulful and sensual even on slow burn. White's vocal whispers its edgy truth, underscored by his signature guitar sound. "Closing in the Fire," with Williams, is a steamy, R&B growler with horns. The riff is a mid-tempo take-off from her own "Hot Blood," and this tune feels as if it is an update of hers. "Playa del Carmen Night," with its Spanish folk overtones, is a duet between White and his daughter Michelle. It's a whispering love ballad, one that shimmers with acoustic guitars and hand percussion. Michelle White, a fine country and blues singer in her own right, brings the notion of memory inherent in the song's body full-force to the front line. It's bittersweet and beautiful. "Wild Wolf Calling Me" features Harris in fine voice at her country gospel best. White's baritone snakes around her plaintive wail and moan and brings a hint of the foreboding eternal to her testament. Colter is a country music legend, and this track's the evidence as to why. Her subdued, deeply expressive, reedy croon goes up against the fuzzed-up blues guitars, while White's ominous baritone adds depth, and an otherworldly dimension, to his song. The rest of the cuts here, with White taking the vocals on his own, are fine as well. They simmer, just below the boiling point, touching on everything from backwoods life, love, politics, and spirituality, to the chaos in a country where firearms do more talking than at any time since the Old West, as in "Chaos Boogie." Tony Joe's writing is flawless, his guitar playing is phenomenal; he gets more creative, funky expression from his minimal, fluid approach than many players who use a lot more notes. Heroines is another winner in the Swamp Fox catalog that once more proves not only is he a vital artist 35 years after his first big hit, but one whose consistency is remarkable and unsullied.