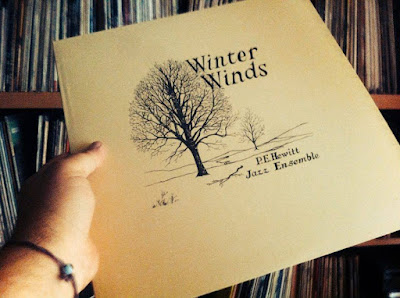 Label : Not on Label

Hewitt was only sixteen when he recorded his first album Jawbones in the auditorium of the Community School of Music and Arts in Moutain View, California, where he was an artist in residence. Part of his mission involved using music as a healing tool for those with degenerative neurological conditions. Another part, no less personal: the incessant need to document the songs and ideas welling up in his own young brain. Jawbones, pressed at Custom-Fidelity Records in Hollywood, California in a run of fifty pieces, paved the way for a second album, Since Washington, so named because the band had traveled to Washington, DC, to play for Richard Nixon. For his sophomore album, Hewitt pressed one hundred pieces.

Winter Winds, his third album, is the most “accessible” of the three Hewitt records. This is not to say that his previous albums are esoteric, just to say that this album appeals to those who might want to dance while having their consciousness expanded. Of the series of 4/4 numbers contained within, “Bada Que Bash,” a modal piece in a latin-tinged bag, stands out. Vocalists Sonia Valledeparas and Nina Scheller seem as if they’re speaking in an exotic language, amidst the band’s cavernous roar.  “This is actually organized scan singing,” Hewitt clarifies. “Instead of incessant, skittly “do wap du bop,” I provided rhythmic words that sounded like a language.” Hewitt was not yet twenty when “Winter Winds” saw its small press run disappear into the ether, awaiting rediscovery decades to come.By Now-Again

What a great blog - thanks for sharing these gems