James Brown At The Organ And His Orchestra - Devil's Hideaway / Who's Afraid Of Virginia Woolf? 1965 (Smash) 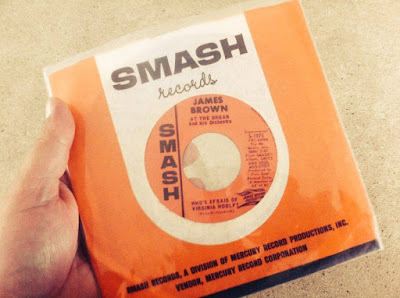 Grits and Soul album finds James Brown in serious Ray Charles mode, drawing inspiration from Charles' big band and organ playing. The results are pure James Brown, of course; his personality has always been too strong to allow any one influence to achieve top billing. Like Brother Ray, the band is razor sharp, no doubt from the endless one-nighters, and the strong hand of their leader. 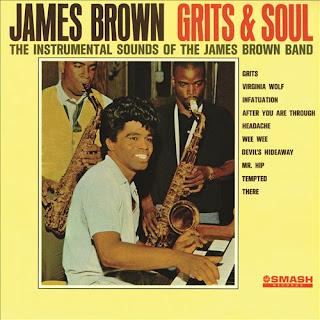 The jazz backgrounds of most of the players are in evidence here, especially on their steady if unspectacular take of Lee Morgan's "Sidewinder." Where they really shine is on "Grits," a slow, throbbing, burbling blues that continually threatens to boil over before simmering down. Guitarist Les Buie's tasteful solo acts as a counterpoint to the wild organ solo by Alvin "Fats" Gonder. James Brown also plays organ on Grits and Soul, but this solo seems almost refined when compared to Brown's individualistic take on the instrument. This is a strong representation of the band, including many of the players soon to be name-checked during the "Soul Brother Number One" career phase who are present here, including Bernard Odum, Maceo Parker, and his brother Melvin. "Grits & Soul" was also a slick way for Brown to sidestep his contractual obligations with King Records, as there are no vocals on this release.


James Brown At The Organ And His Orchestra - Devil's Hideaway