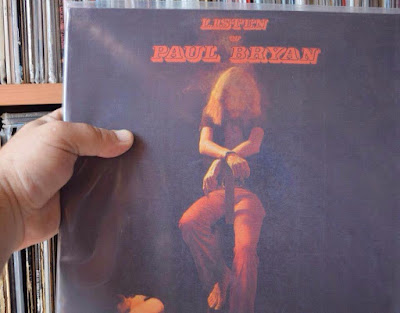 As the grammatically befuddling title might allude, English is not Paul Bryan's native tongue, in fact Bryan is a Brazillian folk songwriter whose real name is Sergio Sa. He assumed this faux-Anglo alter ego as an outlet for his English language recordings made in 1973, inspired by British and American acts like The Beatles and Stevie Wonder. Given how accustomed we might have become to recent Brazillian reissues focussing on tropicalia or bossa nove, these compositions do strike you as incredibly 'westernised' in their presentation: the kinds of rhythms associated with indigenous latin American musics are all but absent from Listen Of, instead the arrangements take on a Burt Bacharach-like syrupy richness, with only smatterings of incredibly technical Brazillian folk style guitar playing giving the game away on occasions. Given the warmth and richness of the string arrangements and the ballad-heavy tone of the writing, you might expect this album to be somehow schmaltzy in tone, or in some way excessively sentimental. Far from it though, Bryan comes across as incredibly genuine and heartfelt, responsible for music that's as beautifully recorded as it is melodic and memorable.