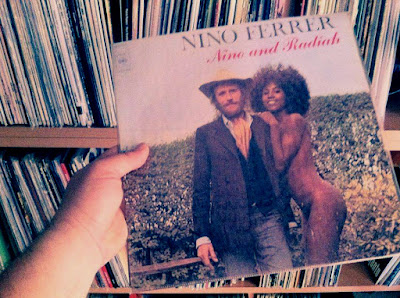 Taking into account Nino Ferrer's personal view of his discography, the album Nino and Radiah should be perceived as his third album (although chronologically this was in fact number seven). It followed the prog rock approach of 1971's Métronomie and the rock & roll leanings of the Mickey Finn collaboration Nino Ferrer & Leggs from 1973. The album is partly named after Afro-American singer Radiah Frye, and her pinup presence flanking Ferrer substantially upgraded the original album cover. Accompanied by the Lafayette Afro Rock Band (aka Ice), Ferrer set out on yet another shape-shifting exercise.
Nino and Radiah is in fact up there with classics like Melody Nelson and Polnareff's.By AMG

P.s Songs "The Garden" with its lazy organ and the bongo-laden "New York" sound fairly close to what the French band Air would build an entire career on.

Nino Ferrer - Looking For You

Dear Sally, Many thanks for all spicedelic rarities. Would you happen to have Gary Wright ‎– Benjamin - The Original Soundtrack Of Willy Bogner's Motion Picture (1972)?

Thank you for the comment.I don't have this soundtrack sorry...
Greetings from Greece!

I can´t thank you enough!