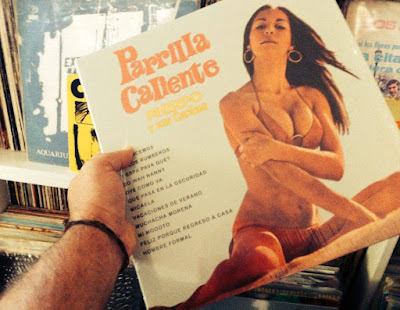 Porfirio Antonio Jiménez Núñez (1928 - 2010) was a Venezuelan bandleader with a Dominican heritage in the field of traditional Latin music like salsa who took a few steps into Western funk and pop music during the 60s and 70s while retaining the obvious elements of a distinctive Latin American sound. His fusion can only be described as an utterly hot and spicy experience just as the title of this 1972 release tells you. Lush brass arrangements, a carpet of poly rhythmical percussion patterns and intriguing melodies hit you directly when you put this nugget onto your turntable and let the needle sink down into the groove. Just in case you are a proud owner of this record since 1972 or have a spare bundle of Dollars in your pocket due to the fact that original copies already fetch prices of 400,00 US$. Well, you have to decide if this collection of salsa funk tunes is worth laying down so many bucks but now that we hold a beautiful reissue in our hands it might be easier to check. I am already out of my head grooving like a maniac through the waves of rhythms and harmonies created by this collective of gifted musicians. Some tunes contain vocals in their native tongue, Latin American Spanish and these are the ones to get pretty close to what SANTANA had done before. Best example is - Oye cómo va' which has been featured on SANTANA's - Abraxas' album two years prior to the release of - Parilla caliente'. All in all this could be watched as a kind of - exploito' album to be sold in the bargain bins of department stores to a rather ingenuous audience craving for some Latin funk and rock pleasure but all in all the performances and sound are so vivid and passionate you will soon forget about the initial purpose of this release and enjoy the rich plate of musical colours Porfi Jiménez and his mates offer.By Deejay

Could you please re-up this, possibly? The link no longer works. Thanks very much for your great site.

Hi and thanks for the comment!Maybe in the future again!

would be appreciated if you can re up this vinyl . thanks in advance.